The politics of change. As trust in our political leaders continue to decline, writings and commentary decrying the malaise in which our democracy finds itself in is booming. Everybody has a view of what’s wrong. Much of it along similar lines of lack of leadership, the short-term focus on elections, the 24 hours news cycle and the adversarial nature of the political discourse. Plus, of course, the inevitable Facebook-, Murdoch- and ABC-bashing, lamenting populism, trashing Trump-ism and generally blaming all the other ‘ism’s’ except one’s own.

The debate is as fierce as solutions are scarce. But the two pieces of writing reviewed here raise above the majority.

As Michelle Grattan puts it in the opening paragraph of her book “The Knowledge Solution“:

“It is a paradox of our modern democracy that we have the conditions and tools to enable our political system to work better than ever before, yet all that seems to be discussed today is its dysfunction.”

Laura Tingle sums it up equally poignant at the conclusion of her Quarterly Essay “Follow the Leader”:

“We should expect our leaders to help rebuild the national debate and protect other voices within it.”

As two of our most merited, best informed, well connected and mostly non-partisan political commentators, they both deserve to be widely read. Both attempt to bring the debate forward, beyond the problem analysis and towards the much more important consideration of finding better ways for democracy to thrive again. As the title suggests, Tingle’s essay (her third in a series that started in 2012) focuses mostly on the dearth of modern political leadership. As a keen student of history she places not just current events, but also the four decades of her own first-hand observations as a journalist into context of people and events, adding personal textures in just the right amount to keep the reader engaged.

As an example, Tingle refers to how the dystopian literature favoured by her adolescent daughter’s generation reflects the emergence of populist strongmen such as Trump, Turkey’s Erdogan and Vladimir Putin.

Throughout history mankind have always looked to strong leaders for guidance and to get us through difficult times. But history has also shown us how some leaders are better suited to crisis, some are better suited for peace and others for transitions.

Winston Churchill led the British Empire through war, yet was unsuited to peace time governing. In Australia, Robert Menzies was a steady hand on the tiller through the post-war recovery period, paving the way for Gough Whitlam to initiate social change long overdue.

History has also shown us how those that don’t seek leadership are often the best suited to it, while those that do seek it are so often not – no better contrasted by Mahatma Gandhi versus Donald Trump.

Tingle discusses different aspects of this leadership dichotomy, and in particular how the intensity of media scrutiny has made our leaders into personalities where their substance drowns in the incessant demand for news and twitterable ‘sound’ bytes.

In the present climate of distrust this also serves to exaggerate the feeling of voter disillusionment. The notion of ‘The Government’ not listening can have a unifying effect, but when ‘ScoMo’ is not listening it becomes personal and thus even more inexorable.

This personification of politics also serves to polarise us. Instead of debating issues and seeking solutions and consensus, we ‘abhor’ Scott Morrison because he is a Pentecostal Christian, Bill Shorten because he married above his assumed ‘working man station’, Malcolm Turnbull because he is rich and Julia Gillard because she chose not to marry and not have kids.

Gone are the days when we liked Bob Hawke just for being true to his larrikin self.

And gone are the days when our political leaders had a well thought out, properly communicated agenda that didn’t just cover the next election cycle. And as Tingle alludes to, the short term nature of leadership is not limited to politics, but is also evident in business, government service delivery, education and science. The end result is that the public debate in general has become shallow and jingoistic. 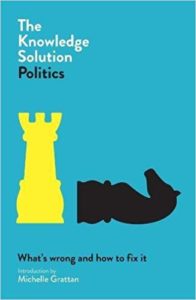 Michelle Grattan touches on much of the same. Her book is an anthology and includes an interesting mix of contributors, some dating back four years, most previously published but no less interesting when put in the overall context of the books’ subtitle: “What’s wrong and how to fix it.”

One of the more predictable but insigthful contributions comes from the venerable Paul Kelly – another stalwart of political commentary. He echoes one of the fundamental problems of our particular brand of democracy – the Westminster system:

“The political system, in fact, rewards division. It encourages one party to sink the other. These divisions are not just ideological; they are tactical.”

As an occasional Murdoch ventriloquist, Kelly knows all about such tactics.

What I found particularly illuminating in the Grattan anthology was the insights from retired politicians. One of those is Maxine McKew – whose claim to fame was deposing John Howard from the seat of Bennelong in the 2007 election. She lost her seat three years later and writes about how her Labor party failed to articulate its core beliefs and raise above what she refers to as ‘extreme and vacuous sloganeering.’

Katharine Murphy, The Guardian’s political editor, explores a different side of the modern political battleground. She talks about how the unrelenting media scrutiny takes a toll on politicians who work extreme hours and spend most of their lives away from their families and communities, let alone their electorates. One of those she talked to about it was Greg Combet who left politics because of the strains it put on his personal life.

Combet also mentions the need to include people of experience, knowledge and expertise from outside of Parliament in Cabinet. It is one of the many reforms that I believe we need to look at to strengthen Executive Government and start rebuilding trust. Both Combet and current Labor MP Terri Butler write about the need to keep money out of politics. Butler unable to do so without her party hat on. It is another important area of reform, but not to include union donations in such reforms is disingenuous at best.

Needless to say, Tony Abbott’s contribution is entirely partisan, but adds to the value of the anthology in conveying – unintentionally – how the actions of the modern political leader is so often far removed from the values and ideologies they purport to stand for.

There are 22 contributors in total in Grattan’s book, all with interesting perspectives. It’s a good read.

The common goal of Tingle’s essay and Grattan’s anthology is to lift the current debate up from the current polarised chasm of personalities, party infighting and entrenched position of largely out-dated ideologies. Laura Tingle does a great job of putting leadership in historical perspective and her essay is a well argued call not just for more bravery and honesty, but above all the kind of leaders that seek to include and not to divide.

Grattan’s “Knowledge Solution” contains many of the ingredients to start the process of redefining the environment that will allow inclusive leadership to thrive.

Both Grattan and Tingle are also insiders to a dysfunctional system, not always the best vantage point and possibly making them less inclined to challenge the status quo too vigorously. But as Tingle says “we should be looking for strong leaders to follow, not a strongman”.

Might I add, although democracy is broken, its fundamental principles remain strong, it is up to us – the people – to demand change.

As outlined in my own book, of course…